Can I implement a recursive relationship in Ninox

I have a table of various articles and I want to reference some articles from any particular article. Can I do this? Thanks

Yes, you can connect a table with itself. Please try if it fitts your purposes.

I just tried this with an employee database, works well but I would like to take it one step further.  I have a layout that shows a list of who reports DIRECTLY to a person but what would really be great is being able to show not only a list of direct reports but indirect reports as well.  Specifically an employee reports to a team leader who reports to a plant manager.  For Supervisor for example, would it be possible to see not only all the team leads that report to them but also all the employees that report up to him through the various team Leads.

If I could do that it would be absolutely fabulous!

Thanks, great program by the way.

There is a certainly a way we can achive that in some kind but it would be the best to see your datamodel for that.

In order to do so you are invited to bring up that question in our free webinar on Tuesdays.

At our Ninox webinar tips and tricks will be presented in the first 30 minutes, the remaining 90 minutes will be used for a live support where the participants' concerns will be solved.

You can register here for the webinar, which takes place every Tuesday at 18 o'clock CEST: https://zoom.us/webinar/register/WN_zoSk2qyNSz6vLRFF1zlakg

Played around with a nested structure a bit more with an employee DB.  Showing a persons direct reports is very straight forward ane it is pretty easy to show in that list of direct reports how many direct reports each of those people has.  Just have not seen an easy way to have a grouped list where you can expand the hierarchy.  Screen shot shows a record of one person with two direct reports one of which has three direct reports. 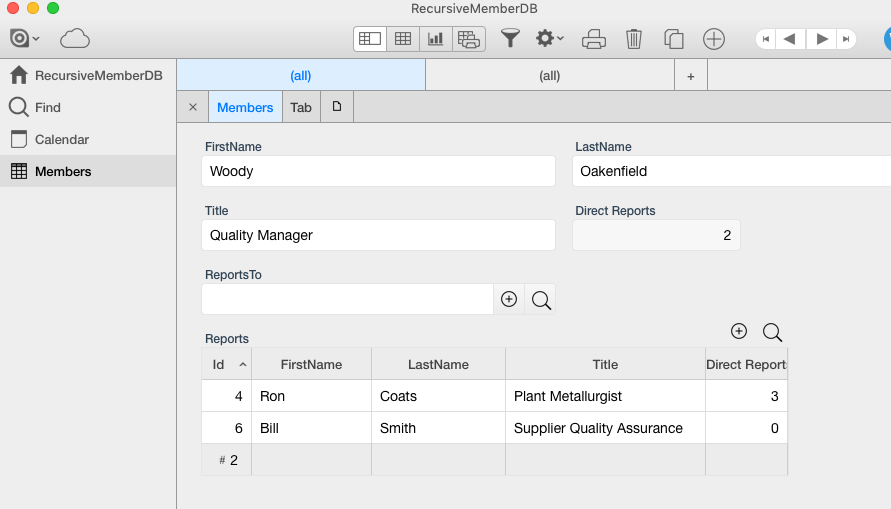 Lets discuss this. I can help. You can book a complementary screensharing session with me via this link:
https://calendly.com/birger-hansen/15min